The main distinction is that state and local courts are authorized to hear cases related to the laws and citizens of their state or city.

The federal court hears your case if:

Congress has, over time, created the federal district courts, where trials take place, and the federal circuit courts of appeal to hear appeals from the district courts. While there are fewer federal decisions, they are often of national importance. The US Supreme Court is the last stop on the judicial path. You don’t listen to every presented case, but you decide which cases to review and decide. The legal term for the order to review a lower court decision is to grant certiorari, often shortened to “grant certificate.

Federal judges are appointed and, following Article III of our Constitution, “they will maintain their positions during good behavior and, at certain times, they will receive compensation for their services that will not be diminished during their tenure in office.” in other words, they are appointed for life and are paid for their work. Federal Magistrates are appointed for limited terms and generally hear disputes involving discovery and other subsidiary matters. 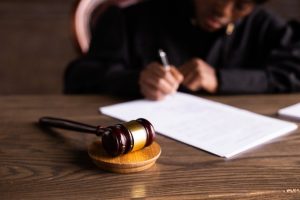 Generally, there are two trial-level courts. District courts, for example, decide landlord-tenant, small claims, traffic violations, civil cases with claims up to $ 25,000, and all criminal offenses (generally, cases where the defendant, if found guilty, cannot be convicted to more than a year in the county jail).

The circuit court hears all civil cases with claims over $ 25,000, all felonies or more serious, family law cases, probate matters, juvenile delinquency, and cases related to the state constitution. In addition, the circuit court receives appealed cases from other trial courts or administrative agencies.

Each state has courts of appeal that hear appeals from the lower courts. The number of appellate courts varies depending on the size of the state and the number of cases.